The Wiscasset veterans monument lists the names of veterans from the Revolutionary War to the present. (Charlotte Boynton photo)

As of last month, the Wiscasset veterans monument contains the names of 10 more veterans, from the Vietnam War to the wars in Afghanistan and Iraq.

The monument bears the names of all veterans from Wiscasset, from the Revolutionary War to the present. 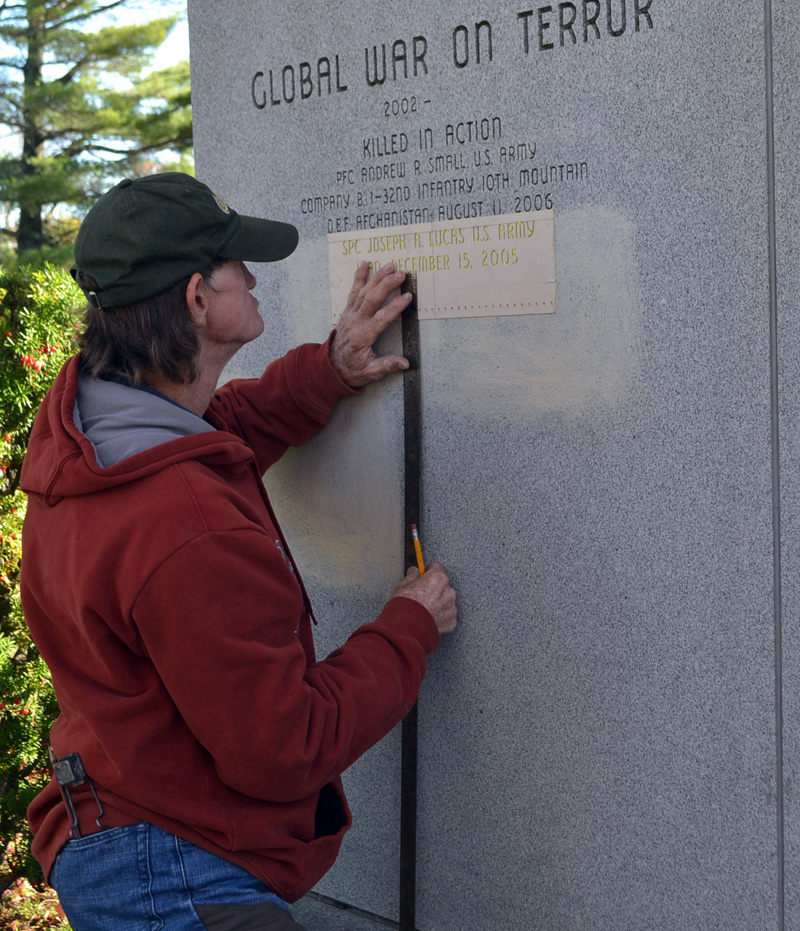 Collette’s Monuments Inc. employee John Sheely prepares to add the name of Pfc. Joseph A. Lucas to the veterans monument in Wiscasset. Lucas was killed in action in Iraq on Dec. 15, 2005. (Charlotte Boynton photo)

Lucas was assigned to the 5th Squadron, 7th Cavalry Regiment, 1st Combat Team, 3rd Infantry Division based at Fort Stewart, Ga. He died at 23 when an explosive device detonated near his Humvee while he was serving in Operation Iraqi Freedom on Dec. 15, 2005.

Small, a 2005 graduate of Wiscasset High School, was assigned to the 1st Battalion, 32nd Infantry Regiment, 3rd Brigade Combat Team, 10th Mountain Division, based at Fort Drum, N.Y. He was killed in action at 19 when his platoon came under attack from enemy forces using rocket-propelled grenades in Nagalam, Afghanistan on Aug. 11, 2006.

The new names of Vietnam and Granada-Lebanon veterans had been omitted in the past.

The town of Wiscasset hired Collette’s Monuments Inc., of Lewiston, to build the monument over 20 years ago. Last month, a 46-year employee of Collette’s, John Sheely, came to Wiscasset to inscribe veterans’ names on the monument for the second time since its construction.

According to Wiscasset Legionnaire Neil Page, the monument was last updated about 10 years ago.

The American Legion Bradford-Sortwell-Wright Post No. 54, of Wiscasset, will host a Veterans Day service at the monument at 9 a.m., Saturday, Nov. 11. The Legion oversees the addition of names to the monument.

Built in 1996, the monument serves as the site of Memorial Day and Veterans Day services every year.