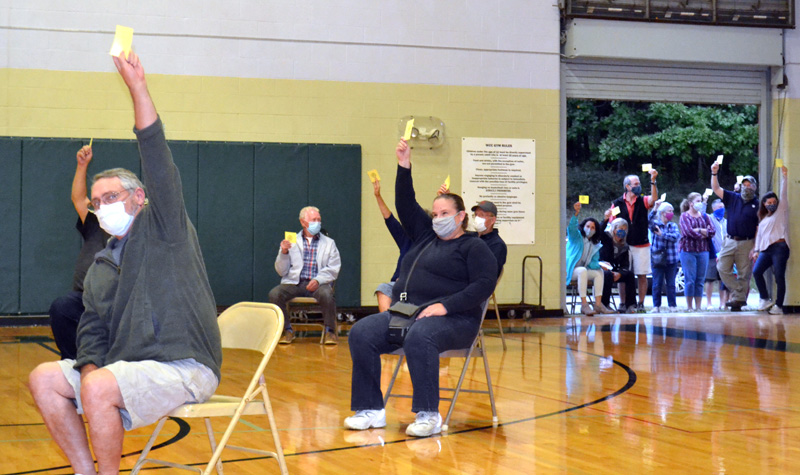 Voters inside and outside the Wiscasset Community Center gymnasium raise their cards to support the Wiscasset Parks and Recreation Department’s budget during a special town meeting Thursday, Sept. 17. (Charlotte Boynton photo)

In a near-unanimous vote, 156 Wiscasset residents approved the parks and recreation budget during a special town meeting Thursday, Sept. 17. Although voters had approved the same budget at the annual town meeting by referendum Sept. 8, Thursday’s vote was necessary to resolve an error on the ballot.

The selectmen delayed the start of the meeting for 15 minutes to allow voters to sign in. Only 50 voters could enter the gymnasium at the community center due to COVID-19 rules, so the rest participated from outside.

Susan Blagden was elected moderator and sworn in by Town Clerk Linda Perry. Blagden read the article asking the town to raise and appropriate $829,889 for the parks and recreation department, with anticipated revenue of $429,000. Selectman Kimberly Andersson made a motion to accept the article, with a second received from Selectman Katharine Martin-Savage. 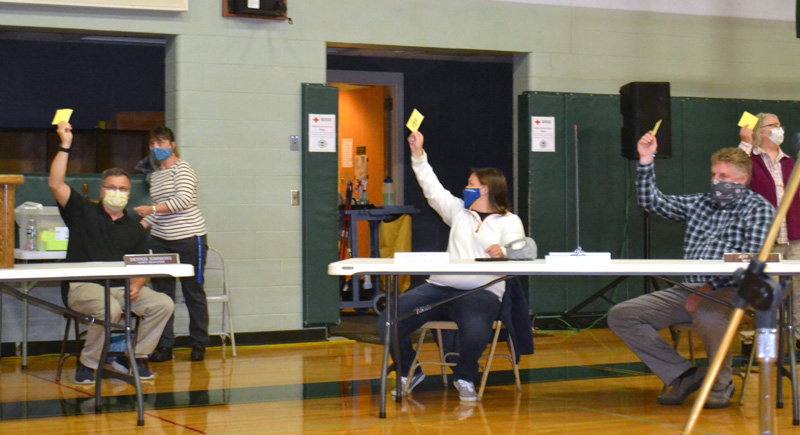 After receiving no comments, Blagden asked for a vote. When she  said “All in favor?” every hand in the gymnasium went up and a person checking votes outside saw just one in opposition.

When Blagden ruled the motion passed, there was applause from the voters both inside and outside the building.

The special town meeting was necessary because of an error by a contractor, Nebraska-based Election Systems & Software LLC, that printed the ballots for the annual town meeting by referendum. 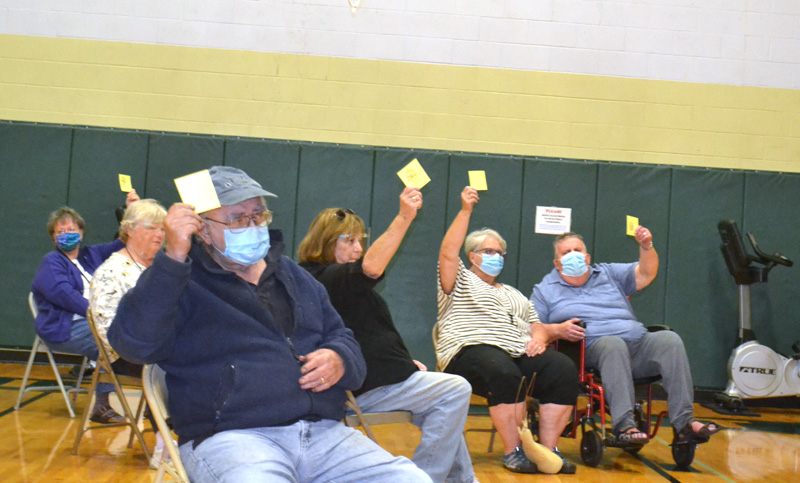 Voters hold up their cards to approve the Wiscasset Parks and Recreation Department’s budget during a special town meeting at the community center, Thursday, Sept. 17. (Charlotte Boynton photo)

The relevant question on the Sept. 8 ballot should have read, “Shall the town vote to raise and appropriate the sum of $829,889 for the Parks & Recreation Department?”

The contractor that prints the ballots omitted the words “raise and,” so the vote did not authorize the town to raise the funds from taxation and other revenue.

At a special selectmen’s meeting Sept. 10, the selectmen scheduled the special town meeting and voted to use contingency funds to cover the department’s payroll in the meantime.

Town Manager Dennis Simmons has said the town will seek compensation from the contractor for costs incurred as a result of the error.