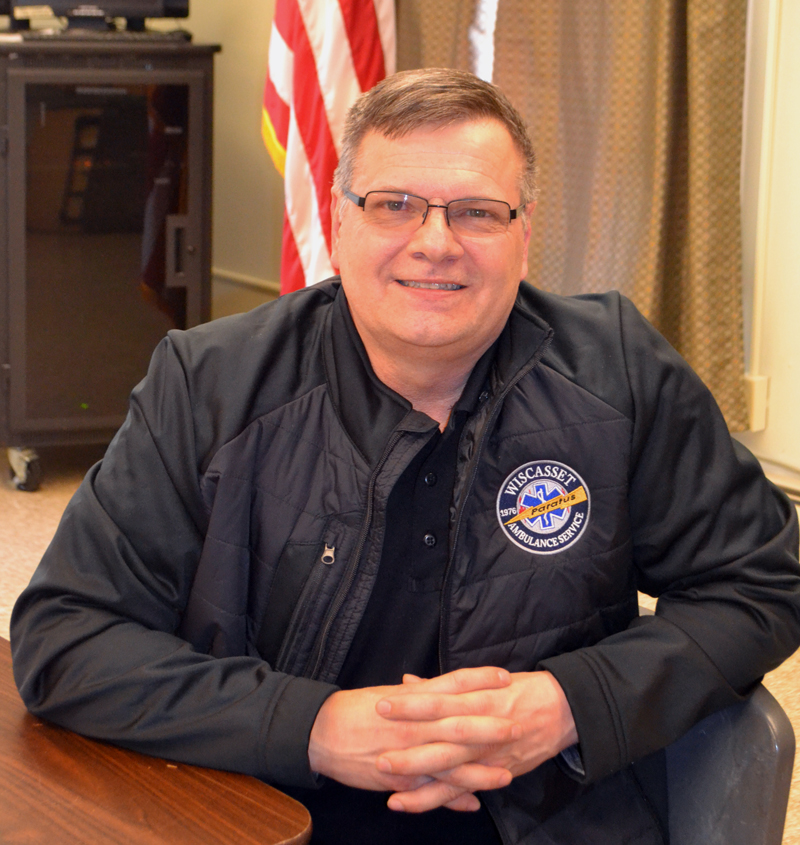 The new director of emergency medical services in Wiscasset brings 17 years of experience with public and private EMS providers, much of it in Knox and Waldo counties.

Dennis Simmons started work Thursday, Feb. 7. He is transitioning between his home in Eliot, in York County, and his job with a private service in Massachusetts, to Wiscasset. As of March 4, he will be in Wiscasset full-time. Interim Town Manager John O’Connell announced the hire Feb. 4.

Simmons has 17 years of experience in EMS as a volunteer and full-time employee. He was a paramedic for the city of Belfast for four years and a division commander with Northeast Mobile Health Services for eight years. With the latter, he worked out of Rockport and led a roster of 22 full-time employees that provided service to four towns: Rockport, Camden, Hope, and Lincolnville.

For the past few years, he has worked for a private service in Massachusetts while living in Eliot. He is looking for a place to live in the Wiscasset area. Before moving to Eliot, he had lived in Knox County most of his life.

For much of his youth, he lived in Friendship and Cushing. In Cushing, he lived in a log cabin next to the house and field where Andrew Wyeth painted his famous “Christina’s World” in 1948. “I remember looking out the window of the cabin at that field,” he said. He would see Wyeth and his wife, Betsy, around the community.

He graduated from Georges Valley High School in Thomaston and was disappointed to see it close in 2012.

Simmons cited two reasons for his decision to take the job in Wiscasset. First, he wants to be closer to his family. His mother, Nancy Weymouth, lives in Nobleboro, and his two sons and five grandchildren live in the area.

The second reason was that he wanted to get back into administration. He has a degree from the University of Maine in public administration and a degree in liberal arts.

“I am no stranger in dealing with selectmen,” he said. “I have worked with four boards of selectmen. I look forward to serving the residents of the Wiscasset community and making sure the service they receive is what is expected from their ambulance service.”

Simmons will be the only full-time employee of the Wiscasset Ambulance Service, which has 16 part-time employees. The service provides 24/7 coverage to Dresden, Westport Island, and Wiscasset.

Simmons devotes much of his time to his work and does not have much time for hobbies, but likes to attend horse shows when he can. His mother had six horses when he was growing up, some of which she showed.

One of the first things on Simmons’ to-do list is to find a place to live in the area that will be safe for his Jack Russell terriers, Foxy and Peaches. “That will make my transition complete,” he said.