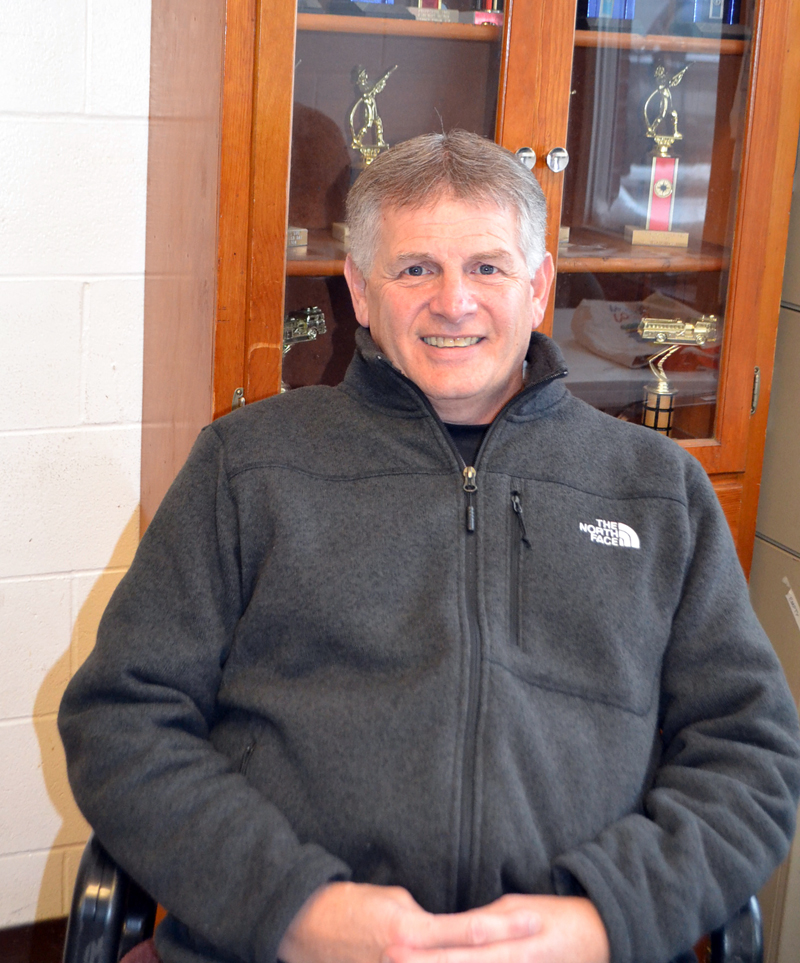 Former Wiscasset Fire Chief and Selectman Tim Merry recently retired from his full-time job as a captain with the Bath Fire Department after 30-plus years. (Charlotte Boynton photo)

There are few people in Wiscasset who don’t know or haven’t at least heard about Tim Merry, a man who has worn many hats in his 58 years of life so far, mostly in Wiscasset. He is a veteran, Wiscasset’s former fire chief, a former selectman, and a volunteer firefighter. He recently retired from the Bath Fire Department after more than 30 years and is planning to take a few months off before embarking on the next journey in his life.

The Merry family’s tradition of service in Wiscasset goes back four generations. Firefighting has always been in the Merry blood. Tim Merry’s grandfather, Fred Merry, was a firefighter on the Wiscasset Fire Department in the 1940s. His father, Gordon Merry, was fire chief from 1968 until his unexpected death in 1990. Tim and his brother, John, joined the Wiscasset Fire Department when they was 18 years old. Tim’s two sons, T.J. and Nick, also joined the department at 18. T.J. is currently Wiscasset’s fire chief and Nick is the assistant fire chief.

A few years after graduating from Wiscasset High School, Tim joined the U.S. Air Force in 1980, serving until 1984. After his tour of duty in the military, he returned to Wiscasset. He worked at the Brunswick Naval Air Station before becoming a full-time firefighter for the city of Bath in 1986, became Wiscasset’s fire chief after his father’s passing in 1990, and worked his way up to the rank of captain in the Bath Fire Department in 2005.

While working for the Bath Fire Department, he became a single parent with very young twin sons. He met a Bath Fire Department volunteer named Lorie Morin, whom he married in 1993. This coming June, Tim and Lorie will celebrate their 25th wedding anniversary. According to Tim, Lorie has some plans for the special occasion.

Lorie not only gained a husband in the union, she also gained two young sons to raise with Tim. Both T.J. and Nick were very active in high school sports, with Lorie always there to cheer them on and brag about their accomplishments, according to Tim. T.J. and Nick are both married now with children of their own.

Tim resigned from the position of Wiscasset fire chief in 2010, after 20 years, but stayed on the department as an active member. In 2011, the Wiscasset Town Report was dedicated to Tim.

According to the dedication in the town report, “Tim put in countless hours at the station keeping up with administrative paperwork, coordinating vehicle maintenance, conducting inspections, and many other tasks. He led the fire department through many challenges, as well, including the budget-crunching times after the closing of Maine Yankee, the national downward trend in volunteerism, and the increase in mandatory training requirements for firefighters. Through it all, Tim maintained a professional, high-quality fire department that outshines any other.”

Tim was elected to the Wiscasset Board of Selectmen in 2013. He served a two-year term and did not seek another.

During a recent interview with Tim, who is still a volunteer firefighter and said he will be as long as he is physically able, he expressed concern about the decrease in volunteerism in the fire service, not just in Wiscasset, but throughout the country.

Tim is known as a quiet, humble man, but one never to afraid to speak out if he has something important to say. During the interview, he mostly avoided the subject of town politics. “I am not going to discuss politics, so don’t go there,” he said.

However, in regard to the Maine Department of Transportation’s downtown traffic improvement plan, he did not hesitate to say he voted for Option 2 and still supports it. The controversial plan includes the removal of parking on Main Street and the demolition of Haggett’s Garage on Water Street.

Merry said he supports anything that will improve pedestrian safety.

“I do not believe the relocation of parking will affect the businesses,” he said. “I believe it will help the businesses in town.”

Tim said he is going to take the next couple of months off to relax and decide what he will do in the future. “I have nothing concrete, but I am going to do something. I plan to keep busy,” he said. “It will be something physically and mentally challenging.”

“I am not sure what I am going to do with my time. One of the things about retirement is, your schedule is pretty flexible,” he said with a smile.