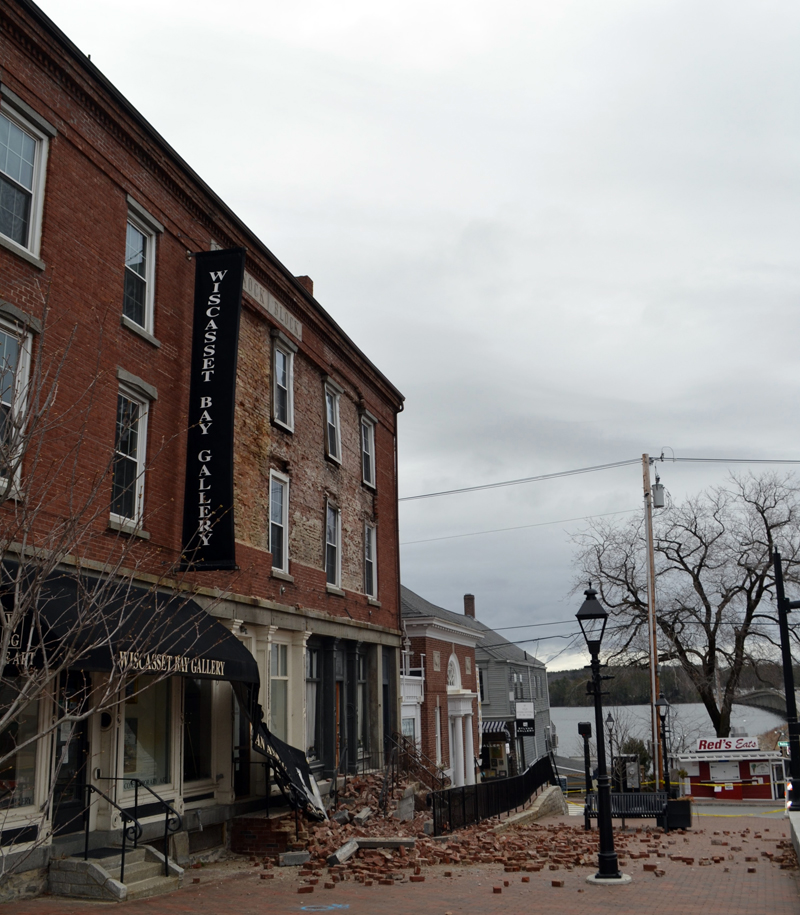 Bricks are scattered on the sidewalk in front of the Wawenock Block after falling from the building Saturday and Sunday, April 3 and 4. The building needs “emergency stabilization,” according to a spokesperson for its owner. (Charlotte Boynton photo)

The 19th-century Wawenock Block building in downtown Wiscasset needs “emergency stabilization” after hundreds of bricks fell from the building’s facade Saturday and Sunday, April 3 and 4.

Wiscasset Town Manager Dennis Simmons said no one was hurt in the incident.

The surrounding buildings were evacuated. The two businesses in the Wawenock building, In a Silent Way and the Wiscasset Bay Gallery, were not open at the time of the collapse and no one was on the sidewalk. The two upper floors of the building are vacant.

The Doering family “swiftly took appropriate action,” said Mark Robinson, a spokesperson for the family. “Within two hours they had a construction professional on the scene to make sure nobody was in danger.”

“On Easter Sunday, Ralph had an expert structural engineer visit Wiscasset to assess the situation,” Robinson said. “At this time, the Doerings have no information regarding the cause of the collapse.

“They are experienced real estate professionals, with a strong network of experts, and they will deal with the situation as such. The first priority is to protect everyone’s safety, and the next priority will be how to remedy the situation.”

“At this time, the building is not considered structurally sound and will require emergency stabilization,” Simmons said in an email. “They are in the process of securing the area with fencing and making arrangements to conduct emergency repairs to stabilize the building.”

The Wiscasset Bay Gallery, at 67 Main St., has been a tenant in the Wawenock building since 1997, according to its website. In a Silent Way, a wine bar at 65 Main St., opened in July 2020. Both businesses will remain closed until further notice.

In a Silent Way addressed the incident in an email newsletter to customers.

“We are so fortunate that no one was hurt, but it has been a devastating few days with very little information,” the message says.

“At the moment, we are not allowed inside the building, but are hopeful that the structure can be deemed safe and secured sometime this week as they continue to assess and stabilize the remaining layers of brick,” the message says. The owners do not know if or when they will be able to reopen.

Robinson said that Simmons and Wiscasset public safety officials “have been phenomenal, extremely responsive right from the start on Saturday afternoon.” He said Doering will remain in close contact with Simmons.

Alexander Johnston Jr. designed the Wawenock Block in 1856, according to the town website. The Doering family has owned the property since the early 1980s.