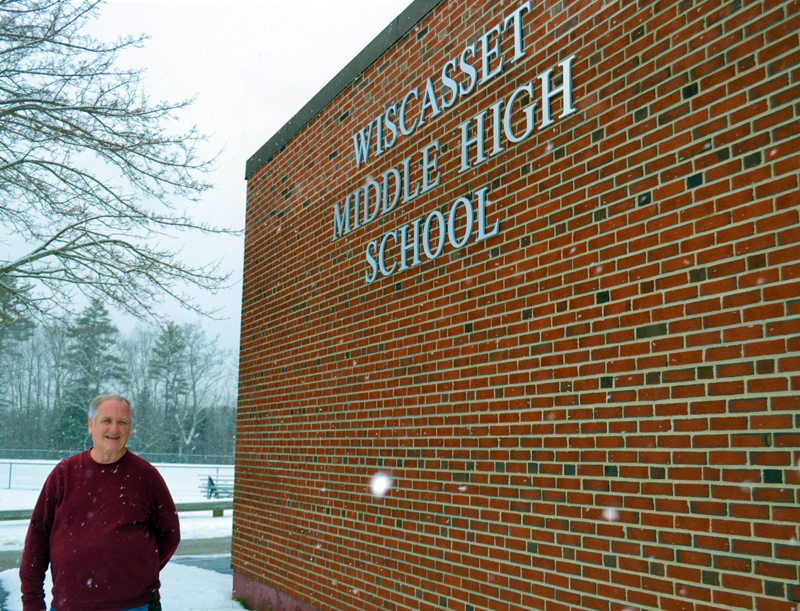 Wiscasset Middle High School Head Custodian Jeffrey Speed is known as a man of few words. Over the past 46 years, he has gained the respect and appreciation of students, teachers, staff, and principals at Wiscasset schools.

Shortly after learning Speed would retire effective Feb. 28, the Wiscasset School Committee voted unanimously to name the upper sports field at WMHS in his honor. On Wednesday, Jan. 27, WMHS staff and students honored Speed with a tribute via Zoom.

The tribute began with a video made by Kyle Ricker on behalf of the students. The video took Speed on a trip down memory lane, with photos dating back several decades. To show their appreciation for Speed, two graduating classes in past years have dedicated their yearbooks to him.

During the tribute, several teachers and staff members spoke of Speed’s dedication to the school, the staff, and the students. He has worn many hats over the years for the town of Wiscasset and the Wiscasset School Department.

His employment with the school department began in 1974, before he graduated from Wiscasset High School, as a bus driver. He drove a school bus for six years before becoming a custodian at the high school.

WMHS Assistant Principal Warren Cossette has known Speed since childhood. “Jeff is a legend, the kindest person you will ever meet. He would not even want to kill a rodent,” Cossette said with a chuckle, referencing a joke among the staff.

Debbie Pooler, an educational technician, said that Speed  “is a big part of the school.”

“He has been a role model for the kids and they love him,” Pooler said. “He is always there when you need him. We wish for him an amazing retirement.”

WMHS math teacher Marija Randall said that when she started in Wiscasset, she came to work early one morning and, shortly after arriving, was greeted by a police officer and Speed. Apparently she had unknowingly set off the alarm. Responding to the alarm is another of Speed’s responsibilities.

“With his dedication to the school district and his love for the community, we will have to look far and wide to find someone to replace him,” Merry said. “I don’t know if that can be done, but we will do our best.”

WMHS Principal Charles Lomonte said the staff would present Speed with a $500 gift card to Lowe’s. “You’re a class act, Jeff, and it has been my pleasure to work with you,” Lomonte said.

Wiscasset School Department Superintendent Terry Wood thanked Speed for his service and dedication. She said he will be missed by the staff and students.

At the close of the tribute, Lomonte asked Speed if he had anything he would like to say.

Being a man of few words, he said: “I would just like to thank everyone.”

Speed’s dedication to the town of Wiscasset also includes 38 years with the fire department and 39 with the ambulance service as a driver and emergency medical technician. He has retired from both agencies.

During an interview on Thursday, Jan. 28, a month to the day before he leaves his position, Speed said he went through all 12 grades in the Wiscasset schools. The schools provided him with his education and his career, for which he is grateful.

As head custodian, Speed has many responsibilities, such as grounds maintenance, including maintenance of the athletics fields; minor repairs inside and outside the building; monthly fire inspections; and setup for graduation.

Throughout his career, he has most enjoyed working with the kids and staff, as well as taking care of the grounds. He said the COVID-19 pandemic has created more work to comply with public health guidelines.

There is one thing he does not enjoy: extermination. He does not mind disposing of a dead rodent, but does not want to kill one.

He recounted a time a bat got into a classroom and the female science teacher had to take care of it. “I just can’t bring myself to kill anything,” Speed said. “I can take care of it after it is dead no problem.”

Of the first thing he will do after retirement, Speed said, “I am going to change my phone number,” referring to his cellphone, which rang during the interview.

He is preparing a three-ring binder for his successor outlining the responsibilities of the job and providing information to ease the transition.

Speed and his wife, Debbie, have been married for 42 years. In 1990 they adopted two girls, half-sisters ages 9 and 4, after first taking them in as foster children. They now have five grandchildren who call them Papa and Nana.

Debbie, who works as a caregiver, does not plan to retire for another four or five years. “I will take it easy for a while and perhaps find some part-time work to keep out of trouble,” Speed said. When the weather and the pandemic permit, they will take some trips in their camper.