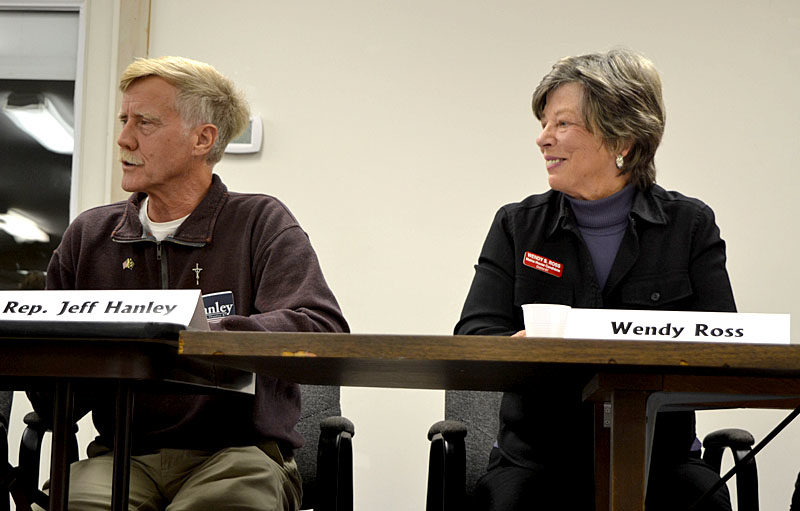 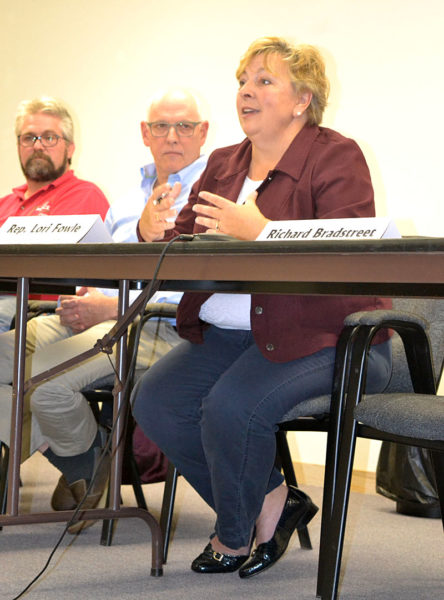 The Lincoln County News hosted the forum, its first of two forums for county residents to hear directly from local legislative candidates, at the Lincoln County Regional Planning Commission in Wiscasset.

After introductions, the candidates discussed how to address addiction to heroin and other opiates.

The candidates agreed on the need for a mix of enforcement, treatment, and prevention to address the problem, though strategies for enforcement and treatment varied.

Fowle is the House chair of the Criminal Justice and Public Safety Committee, where much of the Legislature’s work on drug addiction takes place.

Rep. Jeff Hanley, R-Pittston, represents Alna and Wiscasset in Lincoln County, as well as Pittston and Randolph in Kennebec County.

Hanley said the Legislature might need to work toward mandatory treatment for drug users.

“We’re going to have to force them into treatment. That’s the only way,” Hanley said. “You can’t just keep feeding them drugs or letting them feed themselves drugs.”

Wolf said the Legislature needs “to address why treatment is not immediately available when someone is ready to seek help.”

“It’s a huge issue,” Wolf said. “There are very long waiting lists for treatment” and as people wait, they start to use drugs again.

Some of the candidates suggested harsher penalties for drug traffickers.

“If you want to be really brutal about it, they’re selling death to our children,” Hanley said. “I mean, the death penalty would work really well. They’d never sell it again.”

“We’re not probably going to go that way,” Hanley said, but the state should give traffickers longer sentences.

Pierce’s challenger, Will Neilson, D-Arrowsic, said enforcement “is economically the least efficient way to be dealing with this.”

“I personally am working with a reformed drug addict right now, training him skills and trying to build up his confidence, and it’s working,” Lebida said. “It needs to be community-led.”

The companies “need to be held accountable for how they develop the drugs, how they promote them, market them, and how they then get regulated,” Vitelli said.

“It’s not just our kids who stumble blindly into drug use,” Vitelli said. “It is adults who start to take pain medication for very real reasons … and then it gets away from them for a variety of reasons.”

Neilson and Wolf advocated for Medicaid expansion as a tool to combat drug addiction, transitioning into the next question, about whether Maine should accept federal funds to expand the program.

Wolf said candidates should talk about “restoring” instead of “expanding” Medicaid, since the program was cut in Maine. She also cited a study that said the expansion of Medicaid would save the state money.

“So for me there’s both a moral argument – there is, from a health-care perspective, an argument to say everyone in Maine ought to have a basic level of health care – and there’s also an economic argument,” Wolf said.

In addition to helping addicts get treatment, Medicaid expansion would give a boost to the state’s economy, according to Neilson.

“That would bring about $350 million a year into the Maine economy, into our health-care sector, which is our largest sector by employment and is currently laying people off,” he said.

Other legislators said the expansion of Medicaid would cost the state money and would only benefit single, childless adults.

House District 89 Rep. Stephanie Hawke, R-Boothbay Harbor, said, “It’s very expensive and Maine finally is getting on a good path. We’re not bleeding red, and now all these spenders come in and they want to get the big checkbook out again. It’s ridiculous.”

The candidates also discussed solar energy in response to a question from audience member Sandy Jaeger, of Georgetown.

Hanley said that in the last Legislature he voted against a bill backed by the solar industry and other stakeholders because it would force most Central Maine Power Co. customers to subsidize a small number of solar installations.

“You’re supporting electricity at a higher rate than it should be paid,” Hanley said. “I support solar, wind, hydro, all of it, as long as it stands on its own two feet.”

Hanley’s challenger, Wendy Ross, D-Wiscasset, is a member of a community solar farm on The Morris Farm property in Wiscasset.

“I think it’s true that it does initially raise costs for everybody a very small amount, but I still think it’s a great idea to invest in it and for the state to promote it” in the interest of job creation and environmental protection, Ross said.

The Lincoln County News will host a second candidates forum at Skidompha Public Library in Damariscotta at 6 p.m., Thursday, Oct. 13. For details, see this article.