An agreement between the Maine Department of Transportation and the town of Wiscasset will delay the demolition of Haggett’s Garage until at least February. 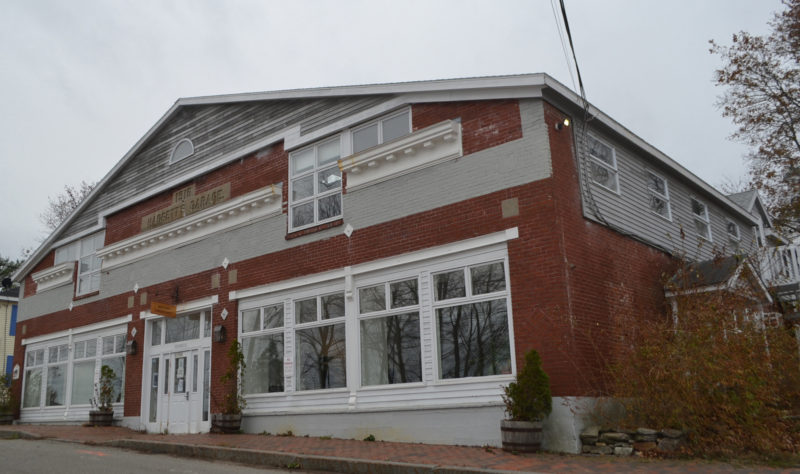 A court order will delay the demolition of Haggett’s Garage until at least February. (Charlotte Boynton photo, LCN file)

An agreement between the Maine Department of Transportation and the town of Wiscasset will delay the demolition of Haggett’s Garage until at least February.

The DOT plans to demolish the building at 36 Water St. to clear the way for a new parking lot, part of its downtown traffic improvement project.

The agreement follows the town’s filing of a complaint against the DOT in Lincoln County Superior Court on Wednesday, Nov. 29. The filing of the complaint, in turn, followed a closed-door meeting of the Wiscasset Board of Selectmen with its attorneys Nov. 28.

The town’s lawsuit ultimately seeks a court order to block the entirety of the project until the DOT complies with all state and local laws and regulations, obtains a certificate of appropriateness from the Wiscasset Historic Preservation Commission, and obtains a municipal-state project agreement from the town “or at least makes a good faith effort to obtain such agreement” before it begins construction.

“In the face of growing concern about the downtown viability without on-street parking and the uncertainty of (the DOT’s) willingness to honor the town’s ordinance process, the town of Wiscasset filed a complaint today in Lincoln County Superior Court,” Wiscasset Town Manager Marian Anderson said in an email to local reporters Wednesday. “The town looks forward to seeing the process through and is hopeful that (the DOT) will comply with the town’s requests. We look forward to continuing to work positively with (the DOT) to resolve the issues.”

Peter L. Murray and John B. Shumadine, of the Portland law firm Murray, Plumb & Murray, are representing the town in the matter.

Along with the complaint, the town’s attorneys filed a motion for a temporary restraining order to block the demolition of Haggett’s Garage.

The town and the DOT reached an agreement outlined in a court order by Superior Court Justice M. Michaela Murphy on Thursday, Nov. 30.

The order blocks the demolition of Haggett’s Garage and any “actual project construction” absent another court order or a written agreement between the parties.

The DOT can continue “design and other activities” in connection with the project and can request bids for construction. The department can also “secure the building” with signs and “temporary barriers.”

The building’s parking lot is currently blocked off and posted with “no trespassing” signs.

During a meeting of the project’s public advisory committee in Wiscasset on Monday, Dec. 4,  Anderson was asked if the Haggett’s Garage parking lot would be available for the Wiscasset Holiday Marketfest Dec. 7-10.

An evidentiary hearing on the town’s request for a preliminary injunction will take place at 9 a.m. Feb. 2.

Haggett’s Garage “is a two-story brick building built in 1916 as the first Ford automobile dealership in coastal Maine,” according to the town’s complaint. In recent years, the building has provided office space for Coastal Enterprises Inc. and, most recently, Midcoast Conservancy.

DOT spokesman Ted Talbot said the DOT “was disappointed to learn the town of Wiscasset has sued the department over certain aspects of the U.S. Route 1 improvement project, despite overwhelming public support for the project design concept in a referendum vote just last year.”

In response to a question about whether the DOT would be willing to change the project, Talbot said, “The department continues to plan and design this important regional transportation project. Because the matter is now in litigation, the department cannot comment further at this time.”

Not all Wiscasset residents are happy with the selectmen’s decision to sue the DOT. Since the announcement of the decision, several have questioned how the town will fund the lawsuit with an already overdrawn legal account.

During a joint meeting of the selectmen and the budget committee Thursday, June 30, Wiscasset Board of Selectmen Chair Judy Colby said that, speaking for herself, the matter of legal fees should be brought before the voters.

Budget committee member Kim Andersson told the selectmen it was irresponsible to bring the suit.

During the selectmen’s meeting Tuesday, Dec. 5, Selectman Ben Rines made a motion to take money for legal fees from the contingency account. Selectman Katharine Martin-Savage seconded the motion.

The selectmen allowed members of the public to speak before they voted.

The comments were divided between people who agreed with the three selectmen who voted to go forward with the complaint – Rines, Martin-Savage, and Robert Blagdon – and those who told the selectmen they are not happy with their using taxpayer money on the issue.

Attendees asked the selectmen how far they would take the suit and whether they have a plan to take care of the downtown if the DOT pulls out.

Blagdon said he was going to vote in favor of the motion and he wanted everyone to know why. If the town decides to go further with the lawsuit, it will go before the voters.

“Right now, we owe this money,” Blagdon said. “Before we spend any more, we will ask the voters.”

The selectmen voted 3-2 to pay Murray, Plumb & Murray from the contingency account.

Concrete barriers block the entrances to the Haggett’s Garage parking lot Tuesday, Dec. 5. An agreement between the Maine Department of Transportation and the town of Wiscasset has delayed the building’s demolition. (Charlotte Boynton photo)