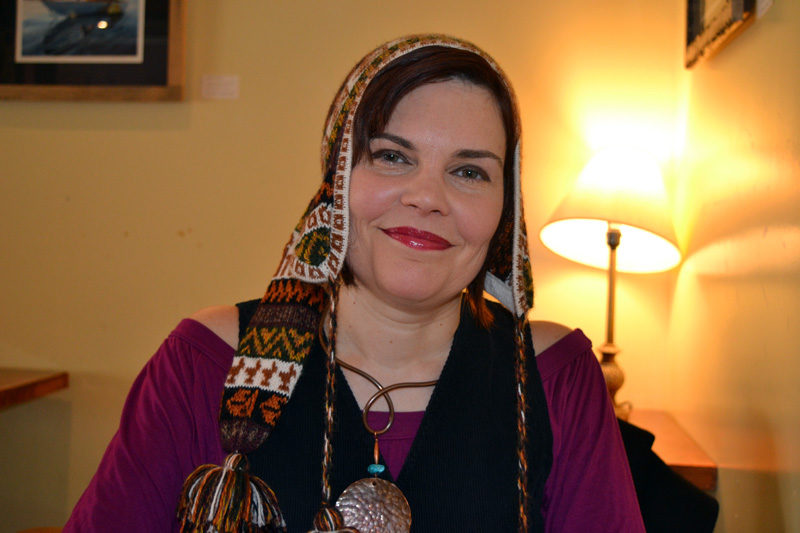 Emily Sabino, half of the musical duo The Flying Seeds. (Christine LaPado-Breglia photo)

Flying Seeds video release: I recently sat down with local musician and empathic healer Emily Sabino to chat about the new video that she and her husband, multi-instrumentalist Lenin Sabino, released on Valentine’s Day. Emily’s mother, as many readers may know, is Newcastle painter Jane Dahmen.

Emily and Lenin Sabino make up the musical duo called The Flying Seeds. The pair has one CD under its belt, 2012’s “Street Songs & Meadow Music, Volume 1,” and a second one, “Cielo Azul/Blue Sky,” is soon to be released. The Flying Seeds’ new video, “Con Solo Una Mirada,” was filmed in Lima, Peru in January, both on the beach along the Pacific Ocean and in the studio.

“We’re focused right now,” Emily said. “We just released a music video on Feb. 14. Another one is coming out on the spring equinox,” Monday, March 20. The name of that video is “Understand Me/Entiendeme.”

“Con Solo Una Mirada” is a beautifully produced video featuring Emily’s lovely voice supported by Lenin’s fine guitar playing and the instrumental work of a number of Lima studio musicians. The English title of the laid-back Latin love song is “You Stole My Heart.” Though not a direct translation, it captures the spirit of the piece, the obvious deep connection between Emily and her husband.

Emily said she met Lenin – who is originally from Huanuco in central Peru – 10 years ago when she was living in Boston and had been given a free ticket to see the Andean band he was playing in at the time. “I was mesmerized,” she said. Lenin, it should be noted, graduated from the Daniel Alomia Robles Conservatory in Huanuco, having studied classical and Peruvian guitar.

Emily and Lenin began collaborating musically, were married in 2010, and formed The Flying Seeds in 2011. They moved to Newcastle two years ago. Besides playing a number of instruments, including Andean flutes and a small Andean stringed instrument called the charango, Lenin runs a contracting and painting business called Incayni (pronounced “in-ky-ni”).

“It is a name he made up by combining ‘Inca,’ the indigenous people from the highlands of Peru, part of his heritage, with ‘ayni,’ which is a word that represents Andean reciprocity, connection, and sharing,” said Emily.

Fans of Emily’s periodic free Sonic Uplift events, during which she combines healing work with her and Lenin’s musical talents in a welcoming community setting, should be glad to know that the next Sonic Uplift will take place from 11 a.m. to noon, Saturday, March 25 at The Second Congregational Church, at 51 Main St. in Newcastle. 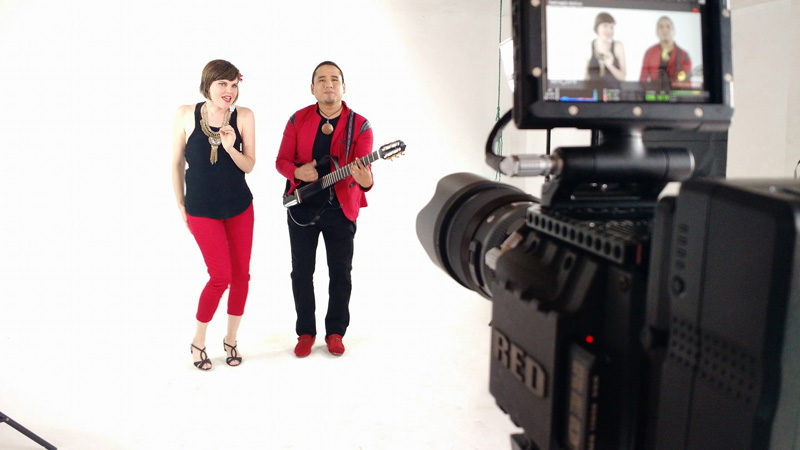 As Emily puts it, “Sonic Uplift is a free one-hour healing event which uses rhythm and visualization to unplug from stress and increase feelings of happiness and well-being.” I went to the last one on Feb. 11 and it was definitely a nice way to unwind. She is also offering a winter healing special through Tuesday, March 21 – $100 for an intuitive reading and healing. Go to frequencyholder.com for more information and to make an appointment.

Watch “Con Solo Una Mirada” on YouTube at bit.ly/2lExFCt. Go to theflyingseeds.com to learn more about The Flying Seeds and to order merchandise.

Family-friendly fare to cap off a fun vacation week: For those of you looking for something to do with your kids this weekend, Lincoln Theater Executive Director Andrew Fenniman points out that the Damariscotta theater is offering “two free, kid-friendly shows to wind out the week.” Yes, free. On Friday, Feb. 24 at 2 p.m., Lincoln Theater will screen “Billy Elliot: The Musical,” a stage musical live-captured from London.

“With music by Elton John, the plot revolves around motherless Billy, who trades boxing gloves for ballet shoes,” Fenniman said, succinctly summing up the story line. Readers may be familiar with the 2000 movie “Billy Elliott,” starring Jamie Bell, Julie Walters, and Jean Heywood, on which “Billy Elliott: The Musical” is based. Watch the lively trailer at bit.ly/2kOBXU9.

On Saturday morning, Feb. 25 at 10 a.m., the theater will screen the classic family movie “Black Beauty.” “The story centers on a 15-year-old girl who volunteers at a city pound, and convinces her grandfather in the country to adopt a horse that was rescued from an abusive owner,” said Fenniman. Go to bit.ly/2lmX434 to watch the trailer.

Speaking of kid-friendly programming, tickets are on sale at Lincoln Theater for the upcoming live Lincoln County Community Theater production of “Mary Poppins,” which will run Friday-Sunday, March 17-19. Fenniman predicts that it’s “bound to be another family-friendly sellout.” I’m inclined to agree.

“Love is a friendship set to music.” – Joseph Campbell