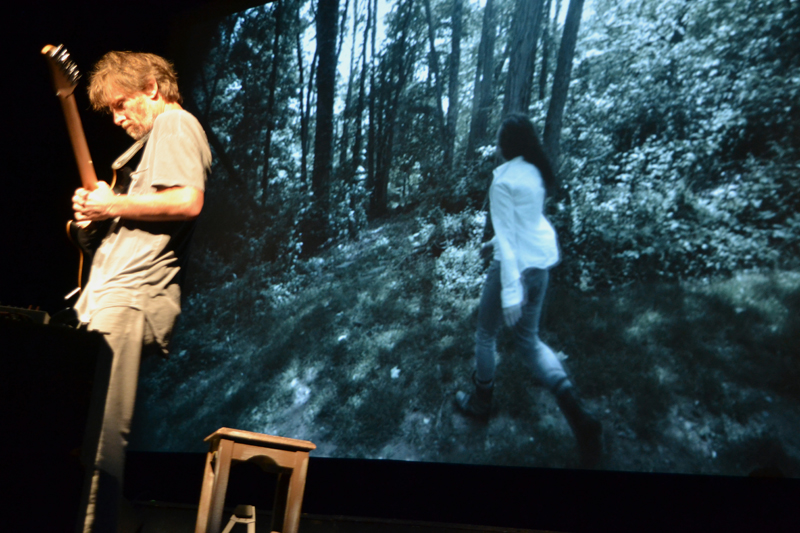 Guitar loops for lunch: I treated myself two weeks in a row, taking in both of Salt Bay Chamberfest’s free Thursdays @ Noon concerts at Lincoln Theater in Damariscotta. Last week, I wrote about the fabulous hour-long solo performance on Aug. 9 by world-class classical guitarist Jason Vieaux. This week, I will tell you about the equally top-notch – but style-wise wildly different – noontime concert of electric guitarist Steven Mackey.

Mackey, who is also a composer and a music professor at Princeton University, presented a one-man multimedia version of “Orpheus Unsung,” his avant-garde take on the well-known Greek myth of Orpheus and Eurydice. In the myth, Orpheus descends into the underworld to visit his wife, Eurydice, and bring her back to Earth, only to lose her forever after turning to look at her as he leaves, a move that was forbidden by Hades, the god of the underworld.

Presented in three acts without pauses – Act 1: Super Terram, Act 2: Sub Terram, and Act 3: Super Terram – “Orpheus Unsung” featured the guitarist switching off on two electric guitars that were run through a pedal board featuring numerous effects. Mackey repeatedly recorded loops of various live guitar lines over which he then played other live guitar lines, resulting in a mesmerizing, multilayered sonic landscape that served as a soundtrack to the black-and-white visuals projected onto the screen behind him. 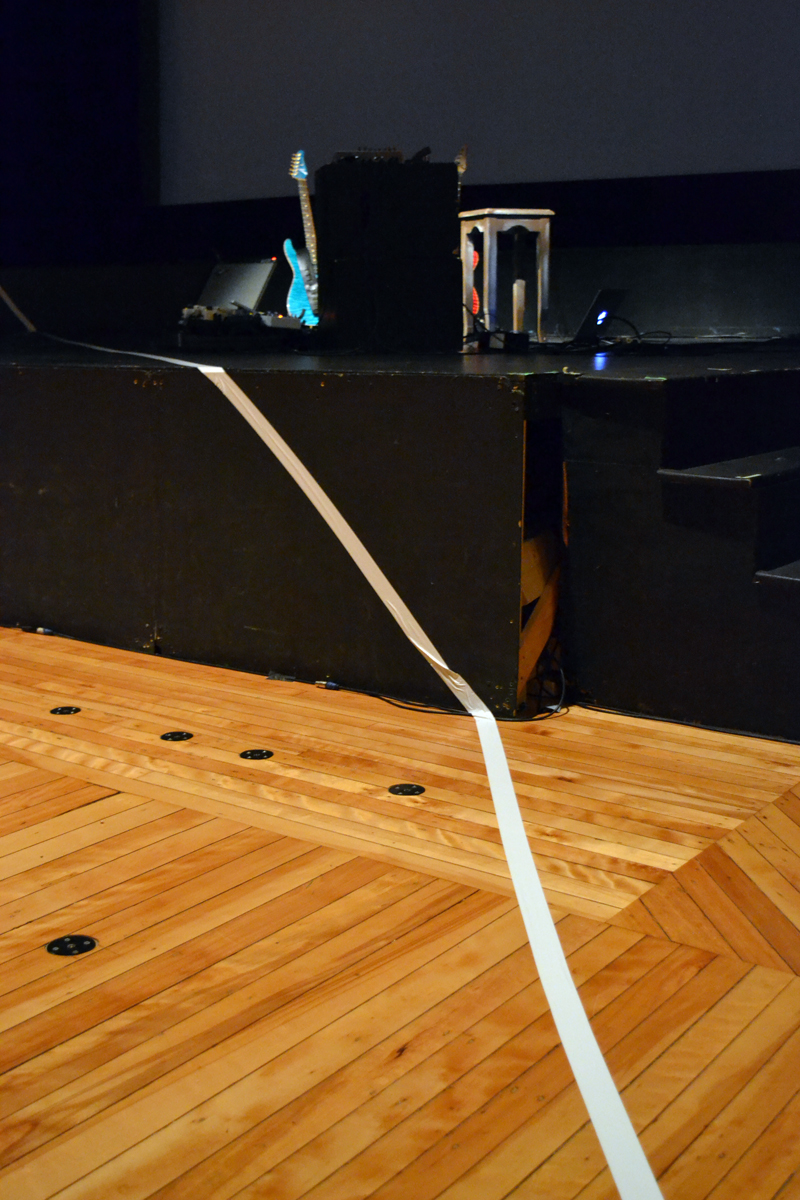 A boundary line made of wide white tape separating avant-garde musician-composer Steven Mackey from his audience echoes the white boundary line featured repeatedly in the film portion of his multimedia presentation of “Orpheus Unsung” at Lincoln Theater. (Christine LaPado-Breglia photo)

Mackey played eerie sounds on his red electric during the opening scenes of the “opera without singing,” as the piece was described at saltbaychamberfest.org. As he played, a man and a woman – apparently the modern-day versions of Orpheus and Eurydice – walked through a forest, the man in pursuit of the woman. As she turns to face him, she becomes trapped in what appears to be a black-and-white photograph before the screen goes blank.

Jerkily moving women in oversized men’s button-up shirts appeared on the screen at various times, reminding one of avant-garde queen Laurie Anderson or even a scene from a Jean Cocteau movie.

Throughout the accompanying film, a theme of a wide white boundary line was established – a line along which people moved, a line that sometimes formed a rectangular box around certain individuals. The line was echoed in the room by a long line of wide white tape that stretched diagonally across the Lincoln Theater stage, down the front of it, and across the floor. Mackey and his equipment were positioned behind that line.

As Mackey’s bare feet manipulated the effects pedals, his hands deftly handled his guitar strings (and some knobs) to produce a variety of chords, rhythms, and volumes. At one point, he pulled a John Cage-like move and played his guitar percussively with what appeared to be a pencil. Sometimes Mackey’s shimmery effects recalled Neil Young’s spare, moody soundtrack to Jim Jarmusch’s quirky 1995 black-and-white film “Dead Man,” starring Johnny Depp.

Mackey’s skillful presentation made it easy for one to suspend one’s normal sense of reality and enter into the strange, intriguing world he created for the audience.

Exiting the dark theater, the bright 1 o’clock sun and the reality of being in downtown Damariscotta hit me. My hour-long escape into Mackey’s compelling world was over.

Learn more about Mackey at stevenmackey.com.