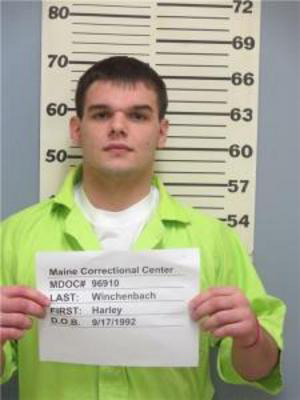 A Waldoboro man has been sentenced to three years in prison and three years of probation for his role in a scheme to distribute crack and heroin in the Midcoast.

Harley E. Winchenbach, 23, pleaded guilty to class B unlawful trafficking of schedule W drugs (cocaine base) on June 27, according to court documents. The charge was reduced from a class A charge of aggravated trafficking.

Winchenbach also has a 2011 conviction for a class B trafficking offense. He is the first of seven defendants in the present case to be convicted.

Winchenbach was sentenced to seven years in prison with all but three years suspended, plus three years of probation. He must also pay a $400 fine.

His probation conditions require treatment for substance abuse. The conditions also prohibit the possession or use of unlawful drugs or the excessive use of alcohol, subject him to random searches and tests for unlawful drugs, prohibit contact with five of his co-defendants, and require him to pay his fine within the first two years of his probation.

If he violates probation, he could return to custody for up to four more years – the suspended portion of his sentence.

Winchenbach’s co-defendants in the case – all of whom face felony trafficking charges – are Chas Echols, 23, of Rochester, N.Y.; Felichia C. Glidden, 22, of Waldoboro; Christopher C. Knight Jr., 24, of Rockland; Rashad Newsome, 23, of Rochester, N.Y.; and Briannah N. Parlin, 25, of Rockland. Echols and Newsome also have prior felony convictions for trafficking narcotics.

A seventh individual, Sydni Barham, of Rockland, was charged in Knox County, but information about the status of her case was not readily available.

The arrests were the result of a month-long investigation by the Maine Drug Enforcement Agency, along with the Lincoln County Sheriff’s Office and the Waldoboro Police Department, into the distribution of crack cocaine and heroin in the Midcoast.

Echols and Newsome allegedly rented cars to bring crack cocaine and heroin from New York to Maine for resale in the Rockland, Thomaston, and Waldoboro area on a weekly basis, according to an MDEA press release.

The five Maine residents allegedly assisted Echols and Newsome by both selling the drugs themselves and allowing the New Yorkers to use their residences to sell drugs, according to the press release. Undercover agents purchased crack cocaine and heroin from members of the group during the investigation.

Shortly after midnight on Feb. 10, agents executed a search warrant at Winchenbach and Glidden’s home at 44 Staley Lane, off Wagner Bridge Road, and arrested Echols, Glidden, Newsome, and Parlin inside.

Agents seized 40 grams of crack, 6 grams of heroin, Ritalin, Suboxone strips, packaging materials, and $5,000 in cash, including bills with serial numbers matching those from an MDEA drug buy, according to court documents and the press release. The approximate street value of the drugs was $10,000.

Knight and Winchenbach were arrested nearby when Waldoboro police stopped Knight’s car after it left the Staley Lane residence.

Agents and Rockland police arrested Barham at her apartment on Broadway in Rockland.