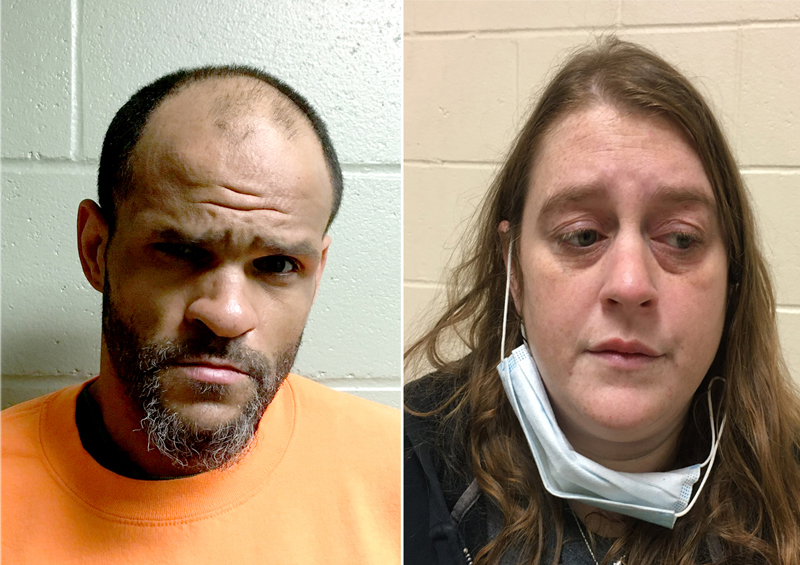 Police arrested a Wiscasset couple the morning of Friday, Dec. 11 in connection with an armed robbery at Maxwell’s Market in Wiscasset two weeks earlier.

Shane Blair Lemont, 41, whose criminal history includes a 2004 conviction for robbery in Sagadahoc County, and girlfriend Kristin E. Crowley, 35, each face a charge of class A robbery, according to court documents and press releases from the Wiscasset Police Department and Lincoln County Sheriff’s Office.

Lemont also faces one count of class C possession of a firearm by a prohibited person, according to the criminal complaint against him. As a felon, he cannot legally possess firearms.

Officers from the two agencies arrested the pair at their home on Brown Road, off Old Sheepscot Road, without incident. They were taken to Two Bridges Regional Jail.

At about 9:33 a.m. Nov. 27, a man wearing a baseball cap, face mask, hoodie, and sunglasses entered Maxwell’s, on Gardiner Road. The clerk told police that after walking by the coolers, the man “approached him at the counter displaying a pistol,” according to an affidavit by Sgt. Perry Hatch, of the Wiscasset Police Department.

The man demanded cash and fled with about $300 from the register, according to police. Surveillance cameras at Maxwell’s and neighboring businesses captured the robbery and showed the man running north along Gardiner Road and entering a waiting vehicle, a small, white car, on the passenger side. The vehicle then headed north.

Three people responded to the post identifying Lemont as the person in the image, according to Hatch. Police learned that Crowley’s mother had rented the couple a white 2020 Hyundai Elantra, a compact car.

While canvassing the area after the robbery, a state trooper found a baseball cap and sunglasses on the side of Middle Road in Dresden that matched the description of those worn by the robber, according to police. The items were taken to the state crime lab.

On Dec. 2, the Wiscasset Police Department, Lincoln County Sheriff’s Office, and Maine State Police Tactical Team executed a search warrant at Lemont and Crowley’s residence. The agencies collected more evidence, but did not make any arrests at the time.

Lemont and Crowley each said they had been with the other the day of the robbery and no one else had used the car, but they “denied any knowledge of the robbery,” Hatch said in the affidavit.

The state crime lab obtained DNA from the sunglasses and, through the FBI’s Combined DNA Index System, linked it to Lemont, according to Hatch. Police arrested the pair just before 7 a.m. Friday.

Lemont and Crowley are scheduled to appear at the Lincoln County Courthouse in Wiscasset on Jan. 28.

“The quick closure of this investigation is an excellent example of multiple agencies and the community working together,” the Wiscasset Police Department said in its press release, noting that the arrest came exactly two weeks after the robbery.

Hatch and Detective Terry Michaud, of the Lincoln County Sheriff’s Office, are the lead investigators on the case and ask anyone with information about it to call the Wiscasset Police Department at 882-8202.

Anyone who has information about the robbery can also send an anonymous tip to the sheriff’s office: Text LTIP to 847411, add a space, type in the information, and hit send. Tips may also be sent through the Lincoln County Sheriff’s Office Facebook page or through the agency’s website, lincolnso.me.