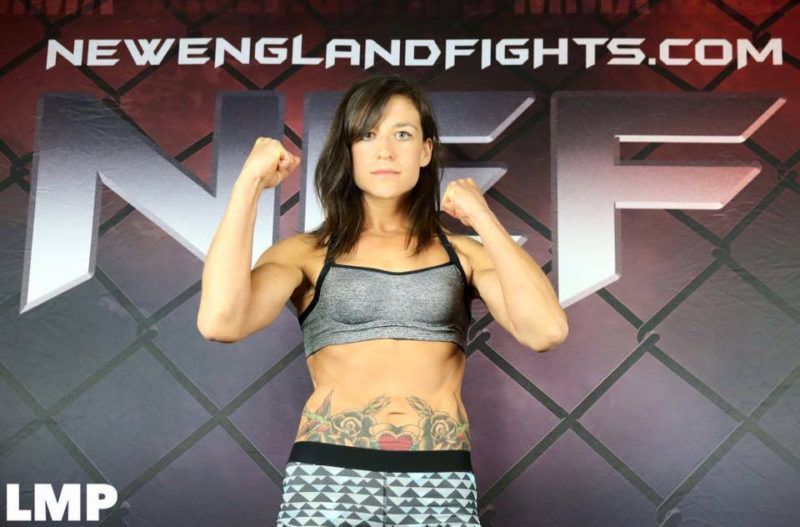 The amateur featherweight match will be part of the New England Fights event NEF 26: Supremacy at the Androscoggin Bank Colisee. The event will begin at 7 p.m. and Sparrell’s fight is the fourth of 14 on the card.

Sparrell, 31, of Walpole, fights with Brunswick’s First Class MMA. She began her MMA career just over a year ago when she defeated Kira Innocenti by unanimous decision at the Colisee on Sept. 12, 2015.

Sparrell lost her second fight to Angela Young by unanimous decision at the Colisee on April 23.

The “back-and-forth battle has been one of the most memorable this year in NEF and could be in the running for Fight of the Year honors,” according to an announcement on newenglandfights.com.

“Though I lost my fight to Angela during NEF 22, I left there with my head held high, a newly recognized confidence, and a hunger to get in the cage once again,” Sparrell said on newenglandfights.com.

“I noticed where I had improved, and it motivated me to continue to train hard and gave me ideas and inspiration as to where I wanted to focus and build on,” Sparrell told The Lincoln County News.

She continues to train in jiujitsu and wrestling and said she has “fallen more and more in love with the stand-up arts, boxing and muay thai.”

Her opponent this time around is a much more experienced fighter than she has previously faced. “She’s a black belt in judo, so I know I have a good fight ahead of me,” Sparrell said.

“Her experience and comfort level in the cage gives me a determination to train hard, give her a good fight, and feel the sense of empowerment of having my hand raised after the hard-fought rounds,” Sparrell said on newenglandfights.com.

Sparrell – who has built a large following in Lincoln County and the Maine MMA world – again expects a large local crowd to attend the fight. More than 100 people have contacted her for tickets.

“The encouragement from our local community is so amazing and motivating,” she said. “It will be amazing to see so many local faces out there cheering me on this Saturday!”

Tickets start at $25. To purchase, call the Colisee box office at 783-2009 ext. 525 or go to thecolisee.com. For more information, go to newenglandfights.com.