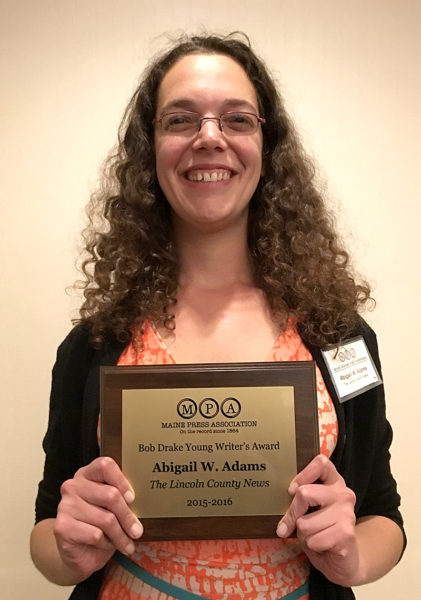 Adams received the award during the association’s annual conference Saturday, Oct. 29 at the DoubleTree by Hilton hotel in South Portland.

The award was the highlight of the LCN’s total haul of 20 awards in the Maine Press Association Better Newspaper Contest.

Adams, 35, of Damariscotta, is the second LCN reporter in three years to win the Bob Drake Young Writer’s Award, after Dominik Lobkowicz in 2014.

“Abigail is a conscientious reporter, one who cares deeply about her work,” LCN Editor J.W. Oliver said while introducing Adams during the awards ceremony. “She is smart, she is tough, she works hard.”

Adams “understands community journalism and brings the same dedication to a feature about a second-grader’s effort to convince his town to establish a public library that she brings to her ongoing coverage of the county’s response to the heroin crisis,” Oliver said.

Adams covers the county seat of Wiscasset, as well as the towns of Alna, Dresden, Edgecomb, Westport Island, and Whitefield. She joined the LCN staff in October 2014.

The award recognizes a full-time staff member of a Maine Press Association member newspaper with fewer than two years of full-time experience as of the deadline for nominations.

Among other highlights of the awards ceremony, the contest judges named Glenn Chadbourne the top editorial cartoonist for all weeklies for the third consecutive year.

The Lincoln County News competes in the category for the state’s large weekly newspapers, although the Drake Award includes all newspapers in the state and the Editorial Cartoonist category includes all weeklies.

Journalists in New England states other than Maine judge the contest.

During the all-day conference, LCN staff attended workshops focused on professional development and changes in the newspaper industry, as well as the annual induction ceremony for the association’s hall of fame.

Established in 1864, the Maine Press Association is one of the oldest professional news organizations in the nation. Among its goals, the association works to protect the freedom of the press, freedom of speech, and the public’s right to know, and to promote and foster high ethical standards in journalism.

A complete list of LCN awards with some of the judges’ comments follows:

First Place, Business Story, “ProKnee in Whitefield preps for expansion,” Abigail W. Adams. (Adams “takes what would be a boring planning board story – a business filing for an expansion – and gets through to the real story of a man who experienced a need and built a business around filling it. It’s the kind of made-in-the-USA manufacturing story that should make a lot of us smile.”)

First Place, Continuing Story, Whitefield personal property tax, Abigail W. Adams (“The reporter taps into the community anger in this local story, and she explains complex issues without bogging down.”)

First Place, Courts Story, “Somerville deer-baiting incident lands murderer back in prison,” J.W. Oliver (“Interesting story, complete with a ton of good detail about the man’s history and how police tracked him down.”)

Third Place, Editorial Page, staff (“This paper makes it clear that you can have a strong editorial page with original editorials and by sharing as many letters as possible.”)

Third Place, Sports Profile, “From scrawny to hulk, former Jefferson man transformed his body,” Paula Roberts (“A well-written look into an interesting world. The writer does a nice job getting her subject to share his story and what it takes to make it in body-building.”)