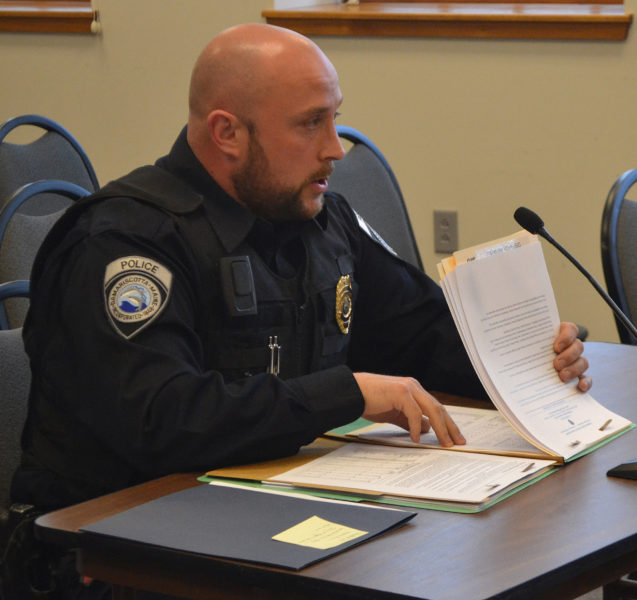 The Damariscotta Board of Selectmen will decide whether to confirm Town Manager Matt Lutkus’ appointment of Jason Warlick as police chief Wednesday, July 19. Warlick has been interim police chief since March 3. (Maia Zewert photo, LCN file)

Damariscotta Town Manager Matt Lutkus, in an email to the Damariscotta Board Of Selectmen, said he appointed Jason Warlick as Damariscotta’s police chief Friday, July 14. The selectmen will vote on whether to confirm the appointment during their meeting the evening of Wednesday, July 19.

In an email to the selectmen containing the agenda for the July 19 meeting, Lutkus requested their confirmation of the appointment.

“During the past six months, Chief Warlick has clearly demonstrated that he has the skills, knowledge, and leadership ability to manage the law enforcement function in Damariscotta,” Lutkus said in his notes to the selectmen. “His job performance as an officer since 2011, and now as acting chief since January, has earned him very positive comments from the community and respect from co-workers both inside and outside of the department.”

The town’s charter requires the chief to be hired under a three-year contract.

Warlick has been with the Damariscotta Police Department since June 2011, when he was hired as a reserve officer. He became a full-time officer in March 2013 and was promoted to sergeant the following year.

The board met in executive session July 5 to discuss the police chief position. Under state statute, the selectmen can hold a closed-door session to discuss personnel matters. Lutkus said before the executive session the discussion would be about a specific person and not the position in general.

The Damariscotta Board of Selectmen’s meeting will begin at 5:30 p.m. in the town office Wednesday, July 19.