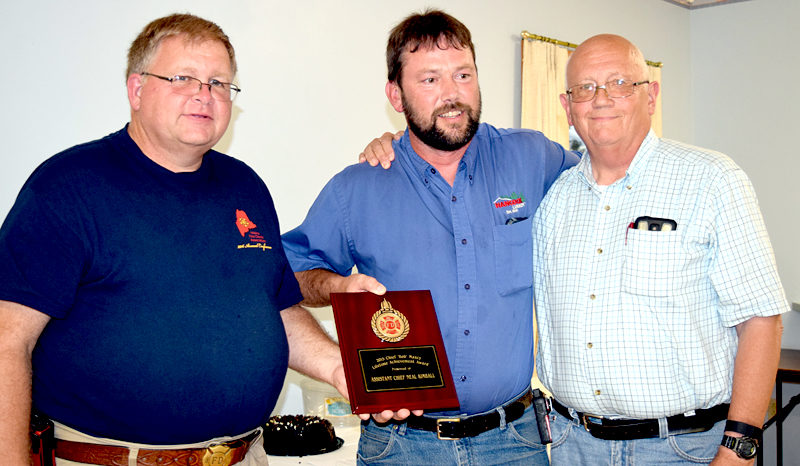 Kimball was the 3rd assistant fire chief in Bristol from January 2012 until his retirement from the position for personal reasons June 14. He plans to remain active with the department in the areas of communications and training, and did not rule out a return to a more active role in the fire service in the future.

Kimball started his firefighting career with the Waldoboro Fire Department in 1989 under the leadership of the late Bob Maxcy, Waldoboro’s fire chief from 1964-2006 and the namesake of the award.

Kimball was Bristol’s communications officer during a transition in radio technology, Leeman said. He became a “self-taught expert” on the subject and the changes he oversaw made Bristol firefighters safer.

Kimball was also the department’s training officer, responsible for “better preparing our members for the many challenges that fire departments face today,” Leeman said.

“His many accomplishments included a safer and very conservative driver certification policy; the refurbishing of our Marine 1 with updated electronics and fuel capacity; a very thorough Marine 1 training policy with many onboard hours training members interested in its operations; in-house annual mandatory trainings for all the town of Bristol departments; impeccable care of our Station 2 in Round Pond and its equipment; and his continued support of me as chief, whether he agreed or disagreed with my decisions,” Leeman said.

“I believe I can speak for all of our members when I say that he will be forever welcomed back,” Leeman said. “Thank you, Chief Neal Kimball, for being a powerful example for all of us to follow, and much luck in your future endeavors.”

The award was a surprise to Kimball.

“I had no clue of that coming, not at all,” he said after the ceremony. “Nobody had even said a word to me.”

Being a firefighter is “the greatest job in the world,” Kimball said. “Every time you go out you’re helping somebody.”

As for his fellow firefighters, “It’s the largest family you can have that you can argue with, but as soon as the tone drops, it doesn’t matter,” Kimball said. “You’re best friends again and you go and do the job. It’s a great feeling working with people like that.”

Kimball is also the current president of the Lincoln County Fire Chiefs Association. His term will end in February and he expects Vice President Walter Morris to become president. Morris is the fire chief in Jefferson.