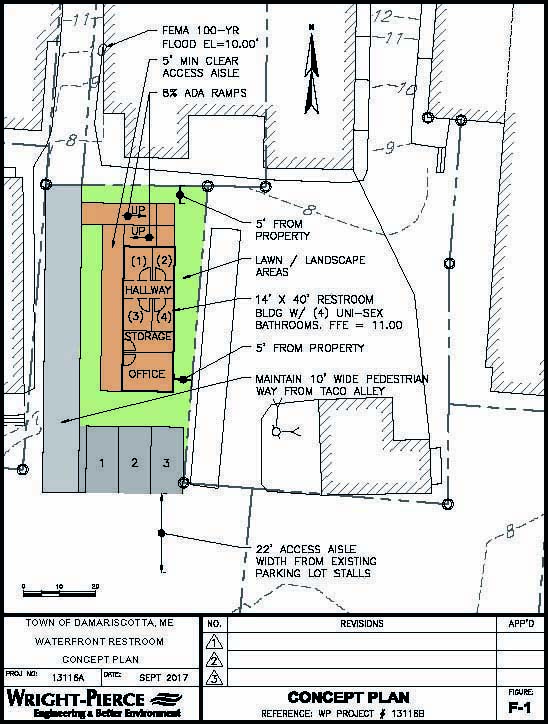 A plan for public restrooms set for construction in Damariscotta’s municipal parking lot in spring 2018.

With an infrastructure project on Elm Street and a major culvert replacement on Egypt Road in progress, another long-awaited project in Damariscotta will soon be underway: the construction of public restrooms downtown.

In an email Sept. 21, Town Manager Matt Lutkus said the town has raised the funds necessary for the construction of both the building and a public walkway through Taco Alley. The town plans to request bids for the project in the spring with the goal that the restrooms will be available for next year’s tourist season.

The building will contain four individual unisex restrooms, a small office for use by the harbor master and other town employees, and a visitors kiosk. The building will be built in the small parking area adjacent to Taco Alley in the municipal parking lot.

In addition to the restroom, the project will include a pedestrian walkway from the municipal parking lot to downtown through Taco Alley. The walkway will create “an urban park setting” and potentially allow for outdoor cafe-style seating, Lutkus said in his email.

The town has considered building public restrooms for decades, Lutkus said. In 1994, John Reny, the president of the Damariscotta Region Chamber of Commerce at the time, presented the town with architectural drawings of a proposed restroom at the site.

“Public restrooms are something the town has needed for many years, and there has been very strong support from local businesses, townspeople, and visitors, and I am delighted to have some role in bringing this to fruition,” Lutkus said.

Town staff will soon meet with members of the Damariscotta Planning Board to review the proposed new structure, which will also be a topic of discussion during upcoming selectmen’s meetings, Lutkus said.

The balance will come from state grant funds and “several generous donations” from individual donors, some of whom do not reside in Damariscotta, Lutkus said. The Twin Villages Alliance acted as the fiscal agent for the tax-deductible donations.

“The interest in waterfront improvement projects increased significantly when potential donors realized it was a doable project, something the town could accomplish without millions of dollars in federal assistance,” Lutkus said. “Once it became a phased and scalable project and not something that was ‘someday down the line,’ donors said, ‘Yes, we want to be a part of this.’” 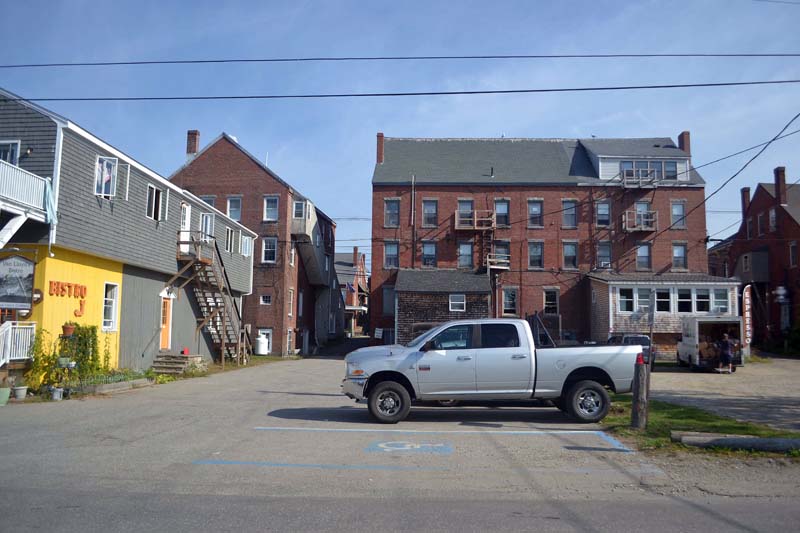 Damariscotta plans to start construction of public restrooms on the site of this parking area and to make improvements to nearby Taco Alley in spring 2018. (Maia Zewert photo)

With donations, the town made major improvements in Riverside Park this spring, including repairs to the riprap and the installation of new sod and turf.

The next improvements in the municipal parking lot will be the installation of a sprinkler system in Riverside Park and a green space around the maritime history kiosk near Misery Gulch, Lutkus said. The reconstruction of the parking lot and a stormwater system is a long-term project.

While the phased project does not include the construction of a seawall or other flood-resiliency measures, protecting the downtown from sea-level rise and storm surge “continues to be a high priority,” Lutkus said.

“The Damariscotta region is ahead of the game and has, since July 2012, acknowledged that storm surge and sea-level rise are two things we need to focus on,” Lutkus said. “While the improvements we’ve identified with this phased approach do not address the long-term need of protecting the waterfront, it is something we will continue to look into and try to identify funding sources for.”