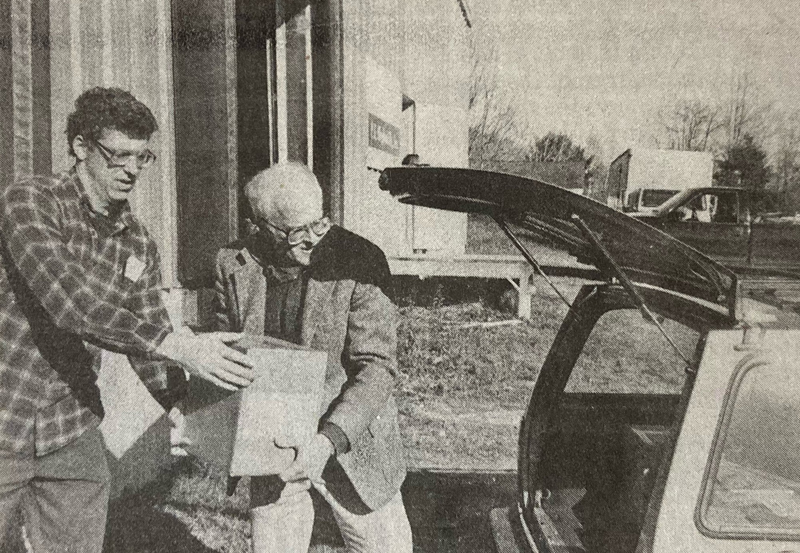 Chris Roberts (left) helps Mark Biscoe load his car with copies of his then-new book, “‘No Pluckier Set of Men Anywhere’: The Story of Ships and Men in Damariscotta and Newcastle, Maine” in a photo from the Nov. 17, 1994 edition of The Lincoln County News. The “Waldoboro Wanderings” columnist died Saturday, Dec. 19 at the age of 84.

Last week in this space, we were celebrating the addition of two new correspondents. This week, we mourn the loss of one of our longest-tenured correspondents: Mark Biscoe, author of the history column “Waldoboro Wanderings.”

“Waldoboro Wanderings” first appeared in The Lincoln County News on Dec. 31, 1998 and last appeared just three weeks ago, on Dec. 3. The hand-drawn banner with its five-masted schooner didn’t change for those nearly 22 years.

Mark and I shared a love of basketball. He became quite interested when The Lincoln County News had a team in a Waldoboro men’s basketball league and would always ask me for updates.

Along with a few other holdouts from the digital age, Mark would often mail in his columns and our staff would type them. He used email and sometimes sent columns by email, but never fully got the hang of it.

In June, Mark asked if we would reprint some of his old columns while he recovered from some health problems. I readily agreed. He had planned to resume researching and writing original columns later in the summer. 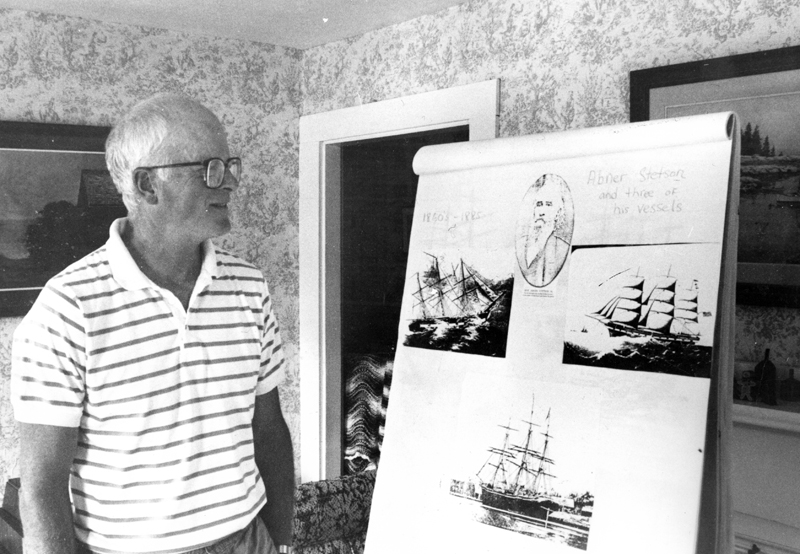 Mark Biscoe gives a presentation on one of his favorite subjects, shipbuilding, in an undated photo from The Lincoln County News archives. Biscoe wrote his “Waldoboro Wanderings” column for nearly 22 years.

I last wrote to Mark by email on Dec. 2, in response to a handwritten note he had included with what I did not know would be his last column, another one from the archives. I know he asked about my family and the staff of the newspaper, as he always did, because I told him everyone was well and gave a report on my family’s Thanksgiving.

“I continue to enjoy your columns, oldies but goodies,” I said in closing. “You have a way of making history come alive.”

He really did. Rarely did I read one of Mark’s columns and not come away with a smile from a humorous retelling of some historical event, or fascination at discovering some part of our county’s past that I never would have discovered otherwise.

To anyone who never read Mark’s column, I encourage you to start with “Havlicek,” his recollection of the Boston Celtics great upon his 2019 death (Mark coached Havlicek’s son’s basketball team during his career as an educator in Massachusetts); “Waldoboro’s greatest disappointment,” a column from March of this year about a prediction of Jesus’ second coming in 1844 that, spoiler alert, did not come to fruition; and, my favorite of all, his three–part 2018 series about Waldoboro’s little-known connection to Tristan da Cunha — an island in the South Atlantic with the distinction of being the most remote inhabited place in the world. You can read all five columns at the links below.

With Mark’s death, The Lincoln County News loses an entertaining and informative columnist and Lincoln County and Waldoboro lose a wealth of knowledge about the area — though much of his knowledge lives on in his columns and his three books: “’No Pluckier Set of Men Anywhere’: The Story of Ships and Men in Damariscotta and Newcastle, Maine”; “Merchant of the Medomak: Stories From Waldoboro, Maine’s Golden Years, 1860-1910”; and “Merchant of the Medomak Volume II.”

In his column about John Havlicek, Mark wrote about his admiration of those, like Havlicek, who are “very capable in their field of endeavor” yet remain “quietly humble.” He may not have intended to, but I think he was describing himself too.