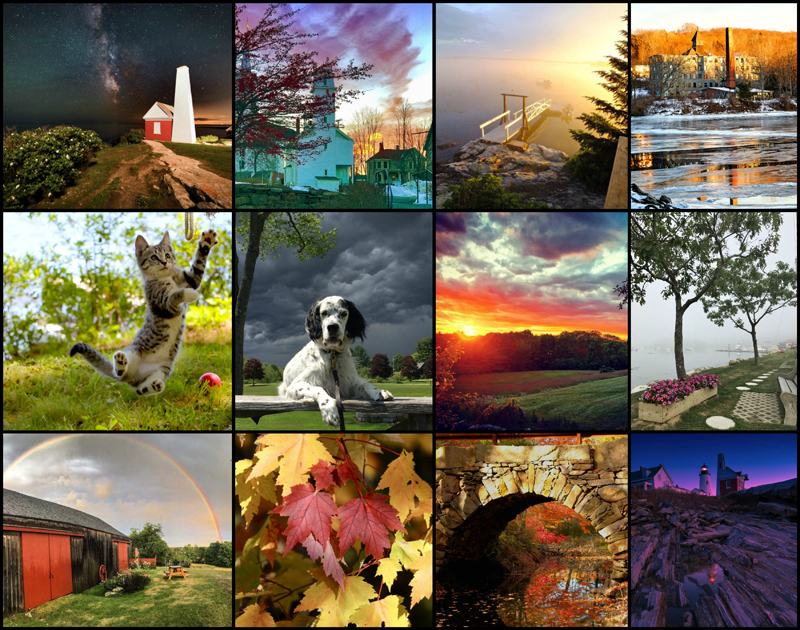 Readers will choose the best photo of the 2017 #LCNme365 photo contest from among the 12 monthly winners (above) by voting online at lcnme.com/photo-contest. The winning photographer will receive a prize package from Lincoln County Publishing Co.

The Lincoln County News received more than 2,500 entries in its inaugural reader photo contest. Now, it will be up to readers to decide which of the 12 finalists will win the 2017 #LCNme365 photo contest.

“We started the photo contest to encourage readers to interact with the newspaper both in print and online, and to bring more of the natural beauty of Lincoln County to our readers,” LCN Editor J.W. Oliver said. “The contest has been a success on both counts, and we are looking forward to the finale. May the best photo win!”

Readers entered photos in the contest throughout the year by either emailing them to photo@lcnme.com or including #LCNme365 in photo captions on Instagram.

A panel of judges from the LCN staff selected a winner each week, which was posted on the Lincoln County News Instagram account every Wednesday. At the end of each month, readers chose the photo of the month from the weekly winners via a poll at lcnme.com/photo-contest.

Savannah Wotton, of Waldoboro, snapped a photo of the town’s old button factory to win April’s contest. Rebekah “Becky” Wilson, of Jefferson, won the May contest with a photo of her daughter’s kitten playing with a string. Wiscasset resident Kate Bryant won the June contest with a shot of her dog, Kentucky.

Doug Macnair, of Oxford, Md., won in October with a roadside snap of maple leaves in Bristol. In November, Sandee Brackett won the November contest with a photo of the historic Arch Bridge.

Brendan Odom, of Bow, N.H., was the year’s final winner with a photo of Pemaquid Point Lighthouse Park at sunrise.

Starting Wednesday at noon, readers can go to lcnme.com/photo-contest to cast their vote for their favorite of the monthly winners. Each person is allowed one vote.

Whichever photo has the most votes at 8 a.m., Tuesday, Jan. 2 will be declared the winner of the 2017 #LCNme365 photo contest. The winning photographer will receive a prize package of  products featuring the winning photo, including decks of playing cards, postcards, and a framed print.

In addition, the winner will receive a one-year subscription to The Lincoln County News and a 2018 calendar featuring the monthly winners of the contest.

With some behind-the-scenes tweaks and changes, the #LCNme365 photo contest will return in 2018. Entries are already being accepted.