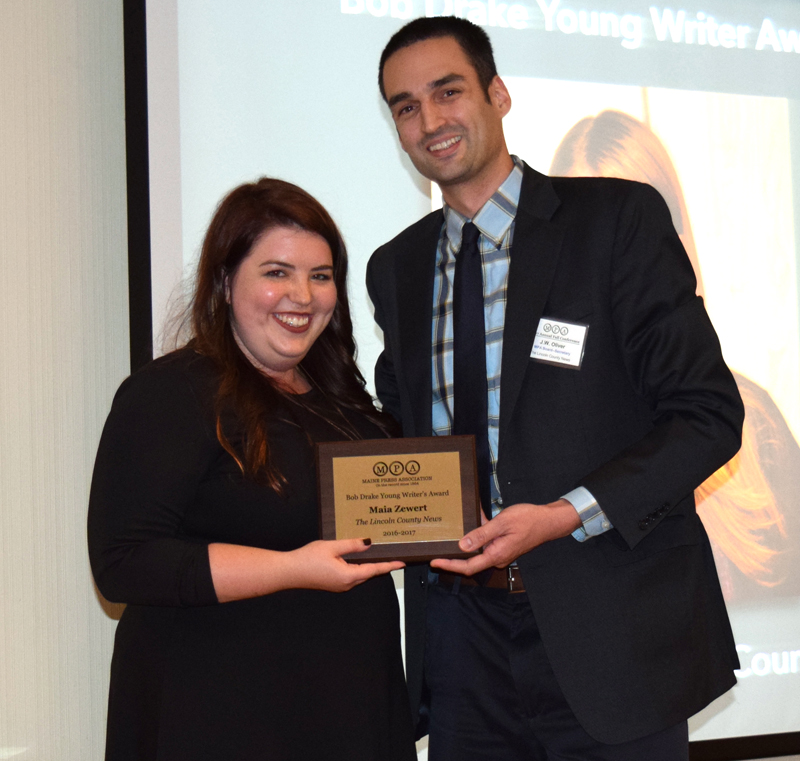 A Lincoln County News reporter is the top young journalist in the state for the third time in four years.

The Maine Press Association Board of Directors selects the recipient from nominees from the association’s 41 members – daily and weekly newspapers and online-only publications across the state.

The award was the most prestigious of 27 awards and mentions for The Lincoln County News during the contest, including recognition of the newspaper’s reporting, photography, and design.

“Maia excels at the local government reporting at the heart of what we do,” Oliver said. “She aggressively covers breaking news. She writes lively features that capture the depth of characters in our community.”

Zewert covers the towns of Bristol, Damariscotta, Newcastle, and South Bristol. She spearheads The Lincoln County News’ social-media strategy and, among other projects, developed the #LCNme365 photo contest.

“Maia also brings qualities you can’t teach,” Oliver said. “Her enthusiasm and outgoing personality have lifted the mood of our newsroom. Her personality also helps her win the trust of the people she covers. People want to confide in her.”

Zewert started work at The Lincoln County News in August 2015, immediately after graduation from Iowa State University. She lives in Newcastle.

The newspaper’s other awards include first place for Feature Story; Picture Story; Self-Promotion, for the rollout of its new website; and Special Section, for the 2016 Pumpkinfest insert.

“These results speak to The Lincoln County News’ commitment to first-class professional journalism and the talent of our staff,” Oliver said.

The Lincoln County News competes in the category for the state’s large weekly newspapers, although the Drake Award includes all newspapers in the state.

Journalists from outside the state judge the entries. The judges of the 2017 contest work in Colorado, Connecticut, Massachusetts, New Hampshire, Oregon, Rhode Island, South Dakota, and Vermont.

During the association’s annual meeting, Oliver was elected to a second two-year term on the board of directors. He is the secretary of the board. He was also a panelist for one of the sessions, titled “News, Fake News, and Media Bias.”

Established in 1864, the Maine Press Association is one of the oldest professional news organizations in the nation. Among its goals, the association works to protect the freedom of the press, freedom of speech, and the public’s right to know, and to promote and foster high ethical standards in journalism.

A complete list of LCN awards with some of the judges’ comments follows:

– “Excellent response to a newspaper’s newest problem. Well-presented and a good reaction from your readers.”

– “Bright and colorful and a great design and read throughout. Excellent job with a comprehensive piece.”

– “Reporter found and told a great yarn about a local doctor who hasn’t skipped a day of running – in 40 years. Lots of interesting detail about running through colds, flu, nasty weather, and other hardships to keep his streak unbroken.”

– “Although there is a lot going on here, it’s clearly broken up and easy to read.”

– “The writer does a great job of putting you right there on the ancient steppes in an endurance sport I wouldn’t wish on anyone. A great telling of an epic tale, one without a Disney ending.”

– “Zewert does what local reporters and newspapers do best: inform and, perhaps most importantly, comfort when a community embraces a child diagnosed with a life-threatening illness. Zewert also approaches a not-so-easy topic with sensitivity and skill.”

– “This writer took a simple letter to the editor and opened the debate on labeling male and female teams to her readers. They are, after all, the ones paying the bills.”