A collision between a Honda Accord and a Boothbay Region Refuse Disposal District trailer on Route 27, near the intersection of Route 1, in Edgecomb sent three individuals to area hospitals the afternoon of Wednesday, Aug. 17.

The fate of the proposed roundabout for the intersection of Route 27, Corey Lane, and Common Drive in Boothbay will be decided by the town’s voters in the Nov. 8 general election.

MaineHealth’s CarePartners program celebrated its 15-year anniversary in Lincoln County in August. What began largely as a billing program for low-income individuals struggling with medical bills has grown into much more, said Anni Pat McKenney, coordinator of the Coulombe Center for Health Improvement.

The Waldoboro Board of Selectmen voted unanimously to put the pay-as-you-throw disposal method on the November warrant, so voters will decide whether to adopt the waste management strategy.

The Dresden Planning Board will hold a public hearing for a medical marijuana greenhouse on Dodge Road on Tuesday, Sept. 6.

The campaign starts today, Maine Attorney General Janet Mills said to county Democratic candidates and supporters who gathered at the annual Lincoln County Democratic Committee lobster bake in South Bristol on Saturday, Aug. 13. The nation is experiencing one of the most unpredictable election cycles it has seen in decades, U.S. Congresswoman Chellie Pingree said, and the stakes for the Nov. 8 general election are higher than ever before.

A Damariscotta-based taxi service has quietly been under new management for the past year and a half.

The Stable Gallery, at 26 Water St. in Damariscotta, was the scene of a well-attended opening reception the evening of Friday, Aug. 12 for the gallery’s “Inspirations” show that will run through Wednesday, Sept. 7.

A South Bristol woman remains at Central Maine Medical Center in Lewiston after sustaining injuries in a three-vehicle accident on Route 1 in Woolwich the afternoon of Sunday, Aug. 14.

Approximately 150 people turned out at the Lincoln Theater in Damariscotta on Thursday evening, Aug. 11 – members and nonmembers alike – for the theater’s annual meeting. Guests arrived via the newly reopened, smartly lit, grand old staircase at the venue’s Theater Street entrance.

A Cushing man shot his ex-girlfriend in the arm in Jefferson, fled police, exchanged gunfire with a state trooper, then shot and killed himself the night of Monday, Aug. 15.

An Edgecomb woman is in fair condition after a motorcycle accident in which she sustained “life-threatening” injuries, according to the Maine State Police. 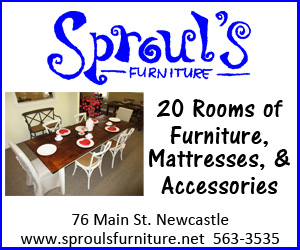